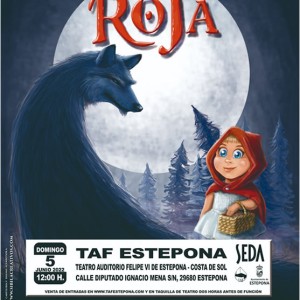 The Estepona City Council informs that the Jabetín Theater Company will take the story of 'Little Red Riding Hood' to the stage of the Felipe VI Auditorium. It will be next Sunday, June 5, at 12:00.

This work, with original direction and script by Eva Martínez, corresponds to a new installment of the collection "The tales of the White Rabbit", which Jabetín Teatro has been adapting.

Little Red Riding Hood is a spoiled and proud girl. Her mother decides to teach her a lesson and sends her to take care of her grandmother, who lives alone on the other side of the forest. In order for him to have a safe trip, he gives him his magic red cloak (which always makes the person wearing it speak truthfully) and calls the super-agent of the forest to leave it on the road. Along the way, he has a chance encounter with a calm and honest vegetarian wolf.

A show recommended for ages three and up, to enjoy with the family.

Ticket sales at www.tafestepona.com and at the Auditorium box office, from two hours before the performance.

This website uses cookies to improve your experience while you navigate through the website. Out of these, the cookies that are categorized as necessary are stored on your browser as they are essential for the working of basic functionalities of the website. We also use third-party cookies that help us analyze and understand how you use this website. These cookies will be stored in your browser only with your consent. You also have the option to opt-out of these cookies. But opting out of some of these cookies may affect your browsing experience.
Necessary Always Enabled
Necessary cookies are absolutely essential for the website to function properly. This category only includes cookies that ensures basic functionalities and security features of the website. These cookies do not store any personal information.
Non-necessary
Any cookies that may not be particularly necessary for the website to function and is used specifically to collect user personal data via analytics, ads, other embedded contents are termed as non-necessary cookies. It is mandatory to procure user consent prior to running these cookies on your website.
SAVE & ACCEPT