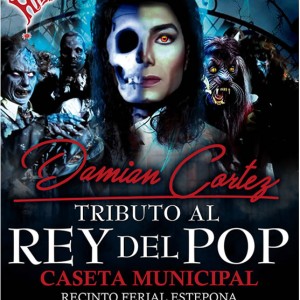 The Estepona City Council informs that it has organized a costume contest for the celebration of Halloween Night, which will be held on October 31 at the Municipal Stand of the Fair, Sports and Permanent Leisure Park.

The Consistory has established the following categories and awards for this edition:

The councilor attached to the area of Culture and Festivals, Macarena Diánez, has encouraged citizens to participate in this event and to be original and creative in the design of costumes to create a terrifying or fantastic atmosphere.

On the other hand, it has been announced that this year's Halloween party, which will take place from 7:00 p.m. to 12:00 a.m., will pay tribute to the 40th anniversary of Michael Jackson's 'Thriller' album, which was published on November 30, 1982 by Epic Records.

For this reason, the party will feature a live performance by Damián Cortez, who will star in a tribute show to the King of Pop.

In addition, for that night two screenings of a "terrifying" choreography show by the students of the Martina Tessaro dance academy are planned.

Another attraction of the night will be the 'Pasaje del Terror' that will be installed in the Municipal Booth and will feature actors who will recreate scary scenes. In addition, there will be a space where a replica of the girl's room from the movie 'The Exorcist' will be made.

Likewise, the deputy mayor of the Sociocultural area, Begoña Ortiz, has announced that for that night the Municipal Booth will change its usual appearance to "make way for beings from beyond the grave and phantasmagorical that will roam freely." In addition to the costumes, there will be decorative elements such as pumpkins, skeletons or mummies. This family party will have the actor from Estepona, Roberto Aragón, as master of ceremonies.

During the party, the bar in the municipal booth will remain open for the benefit of the 'Estepona Solidaria' association.

The event is organized by the Estepona City Council, with the collaboration of the 'Unicornio' Cultural Association, La Cumbre Producciones and the film distributor Arvi Licensing.

This website uses cookies to improve your experience while you navigate through the website. Out of these, the cookies that are categorized as necessary are stored on your browser as they are essential for the working of basic functionalities of the website. We also use third-party cookies that help us analyze and understand how you use this website. These cookies will be stored in your browser only with your consent. You also have the option to opt-out of these cookies. But opting out of some of these cookies may affect your browsing experience.
Necessary Always Enabled
Necessary cookies are absolutely essential for the website to function properly. This category only includes cookies that ensures basic functionalities and security features of the website. These cookies do not store any personal information.
Non-necessary
Any cookies that may not be particularly necessary for the website to function and is used specifically to collect user personal data via analytics, ads, other embedded contents are termed as non-necessary cookies. It is mandatory to procure user consent prior to running these cookies on your website.
SAVE & ACCEPT